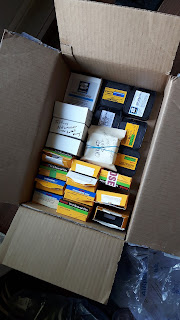 It's a race to the finish, as programs are off to the printers. Posters are being posted and and film has been shipped and returned from Niagara Custom lab (thanks for the quick turnaround!!).

Now it's time to splice onto reels and prep the projector for another great event in Regina this Thursday followed by Saskatoon next Tuesday.

We're thrilled to have had over 50 filmmakers participate this year, with many returning filmmakers.

The Regina and Saskatoon events will be the 61st and 62nd (respectively)  OTS8 events that have been hosted across North America, which is an incredible achievement meaning more than 1200 films in total.

Looking forward to seeing everyone out at the screenings (and we might have some surprise films depending on the efficiency of the Australian/Canadian postal service).

Email ThisBlogThis!Share to TwitterShare to FacebookShare to Pinterest
Labels: screenings 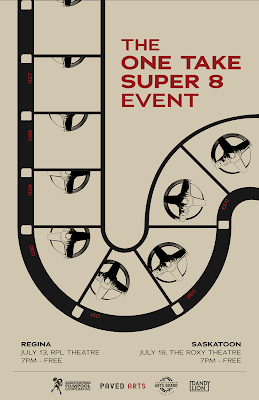 We are very excited to release this year's poster design courtesy of Emily Kohlert (Dandelion) who also created last year's posters and programs. We'll be screen printing them soon, thanks to Tucker's for their continued support, and you'll be seeing them up around Regina and Saskatoon in the next week or so.

Screen printed posters mean the event is just around the corner, and we're very excited that for the first time we have full capacity in both Regina and Saskatoon with each city have 25 new films in production! With any luck everyone will finish on time and we'll get to premiere 50 new films on the 13th and 18th of July.
Posted by One Take Super 8 Event at 4:58 PM No comments:

Email ThisBlogThis!Share to TwitterShare to FacebookShare to Pinterest
Labels: posters

Time flies when you're trying to organize another edition of the OTS8!

We're back in Saskatchewan for the 5th annual event in Saskatooon, and our longest running edition in Regina!

Entry forms have been circulating, people have been signing up, and we're well underway towards our screenings this summer.

Films will be shot during June and returned in time for the July 13th event at the Regina Public Library Theatre, and the following Tuesday, July 18th at the Roxy Theatre in Saskatoon.

Last night, PAVED Arts kindly hosted our first event OTS8 filmmaking workshop (crazy it took 17 years to do that here). Amalie Atkins provided all the tips from her experience with film in how to make a film in a day, and there were lots of great questions from participants keen to try their hand at small gauge filmmaking. What's surprising now as we're that much more removed from celluloid is how many participants have never used a camera with a viewfinder, and how many people regularly use the term video when speaking about making motion picture. Times change!

Lots of first time filmmakers are signing up and we have been able to wrangle enough working cameras to see us through, as color reversal film becomes increasingly difficult to source (Hurry up Kodak with Ektachrome!!). Thanks to Niagara Custom Lab for making magic in getting us enough reels to make sure it's not a monochrome event.

And thanks again to the Saskatchewan Arts Board and SaskCulture through their SaskFestivals grant for providing grant support to ensure we can pay all the artists IMAA screening fees.

2017 brings with it exciting news, including Kodak's announcement of bringing back Ektachrome in Super 8 form! Very exciting, but much like the camera they announced at CES last year, we'll hold our collective breaths until we can hold them in our hands.

As Sundance and Slamdance close up their festivals, there's a little festival in Toronto dedicated to this small gauge formats that celebrating it's 10th anniversary.

Congratulations to the organizers of the 8 Fest for providing a great showcase for small gauge films for all these years, and being dedicated to showing these films in their original formats.

Over the years, the 8 fest has done a tremendous job of featuring many films from past OTS8 events from across the country.

This year, I am deeply humbled (and slightly terrified) to have been selected as the Canadian Spotlight Artist. It's been a very interesting process looking at my past films and having them curated into a program. A few of my past one take films made the list. It's been nice revisiting them again. But there are quite a few films I have never shown publicly before, and this was a good motivation to get them ready for the big screen for their premieres. It's hard to believe that a couple of the films are close to 20 years old already.

The benefit of being a part of OTS8 events is that I was able to share the anxiety with a group of 20+ filmmakers, and only had to bear responsibility for my 3 minutes (good or bad). But having 19 of my films play back to back is a real departure from my comfort zone.

In any case, my thanks to the organizers of the 8 fest for being such great supporters of the OTS8 and if you happen to be in Toronto this weekend, please check out this festival, it's one of a kind and totally worth it.

We're almost at the end of the year, and it's been a busy few months for the OTS8.

Shortly after the Saskatchewan screenings this past summer, we were fortunate to continue our partnership with Revel8 in Perth, Australia which screened 6 films made by Regina and Saskatoon filmmakers. These 6 films (you can see on youtube) received a brand new soundtrack thanks to local composers and musicians in Perth. Jay Sotkowy's Nunchuk Connection won Best International Super 8 Film! 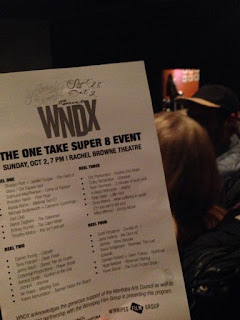 And a few weeks back Winnipeg celebrated their 11th!!!! OTS8 at WNDX.

That's a lot of Manitoba films over a decade, and we're thrilled that they are still going strong. (See list of films and filmmakers at the bottom of this post)

Florida is getting underway their with 9th annual 1:1 Super 8 Cinema Soiree and announced their call for submissions. The screening is going to be at the Savor Cinema Fort Lauderdale which used to be the Cinema Paradiso. This was actually the venue for the very first OTS8 in Florida way back in March 2006. This year's screening will be at 1pm on December 10th. They might consider a name change to Super 8 Cinema Matinee!

We'll keep you posted on some upcoming small gauge festivals in the new year and let you know if some OTS8 participants are screening their work again.

Saskatoon is a wrap. Regina you're up! 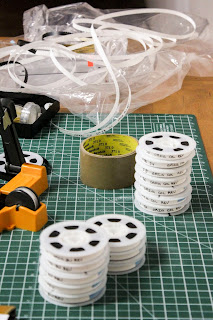 Phew! That was close. I really don't wish to cut it that close again. This morning involved anxiously checking the Canada Post website tracking monitor to see when the package would arrive.
1:03am arrived in Saskatoon. 3:15 am item processed. 5 am item ready for delivery 8:10am item out for delivery. Meanwhile, at 8:25 am I am on air on the local CBC morning show talking about a screening that may or may not happen tonight.

Then I spent the next few hours watching the clock. Finally I saw the postman across the street at my neighbor's house and I frantically ran out my front door and waved him down (he looked slightly apprehensive as he pulled out his earbuds). He told me he had a few packages in the truck and after walking his route would deliver them. Mine might be one of them. AAAAHHHHH!!! I took a deep breath and went back inside and tried deep breathing exercises. Fortunately (as the photo somewhat foreshadowed), the films arrived in time for me to do a very speedy splicing job and get all the films reeled up and headed to the theatre with a little time to spare.

The rest is now history with 25 filmmakers sharing 20 films in Saskatoon to an audience of over 185 including guests visiting Saskatoon from other cities across Canada (love that they chose our event for a Wednesday evening's entertainment). Thanks to the lovely Roxy Theatre for being such gracious hosts once again.

A lot of highlights to share, including returning filmmakers brother/sister duo Charles and Catherine Lemire who made individual films for the event A Birthday Bash / Latin Fever, but there's an auteur streak running their their family. Great use of in camera editing and planning your story in advance.

A couple of pet films (by chance screened back to back) by Chris Smith and Stephanie McKay, highlighting Cheeseburger that cat in a dramatic role in Smith's film and McKay giving her dog Quincy a lead role in demonstrating the finer behaviors of the canine species.

Adeel Salman returned to the festival with a dark romantic tale with a twisted finish. a perfect genre film, timed to perfection.

Brad Proudlove also returned to the event with a prairie music video to the song 'Tuff' by SK Rap duo Run the Pools.

Many other highlights from the night, and despite a few audio technical issues, a smooth presentation to a very appreciative audience. Already looking forward to next year, but first I have to get to splicing those Regina films!

Thanks to Reilly Forbes for the pic!


Well, we're about 48 hours away from our show in Saskatoon, and the programs are printed, the media coverage is underway, and we wait with baited breath for the films to make their way from Toronto to Saskatoon care of Canada Expresspost. If you're keen to follow the progress, here's the tracking #0101385000762737. If you're anxious like me, you'll be looking it up hourly.
The good news is that the expected delivery date is June 8th. The tough news is that will give me just a few hours to splice everything together and get it in a projector at the theatre. No biggie.

Anticipation is ramping up and soundtracks are flowing in. We're going to have 20 films for Saskatoon and 24 screen in Regina. Thanks again to Emily Kohlert for designing the posters and programs.

Spread the word and tell your friends. Show up at the Roxy on Wednesday night to see if I show up empty handed or if we'll get to showcase Saskatoon films in all their glory! 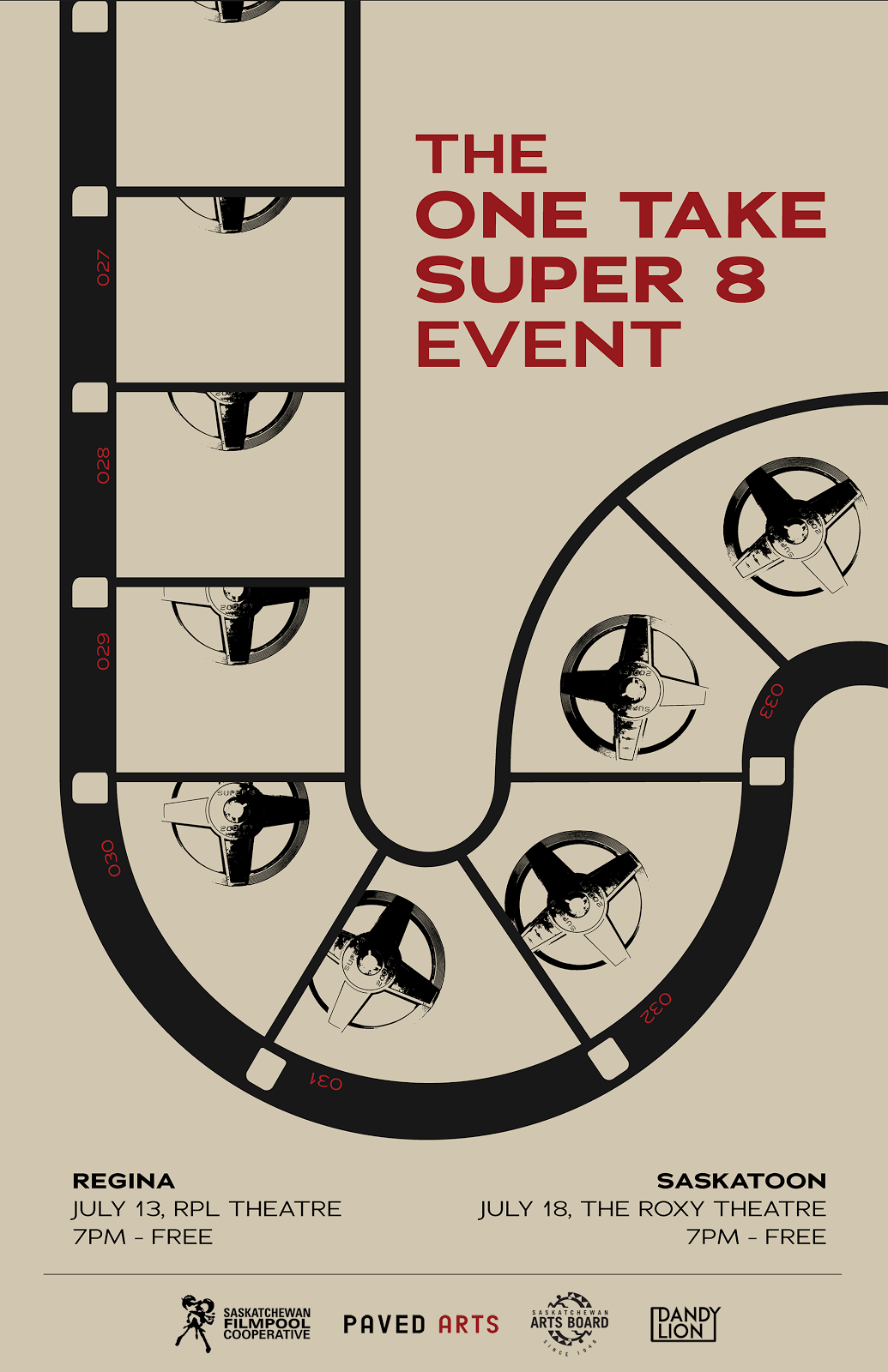 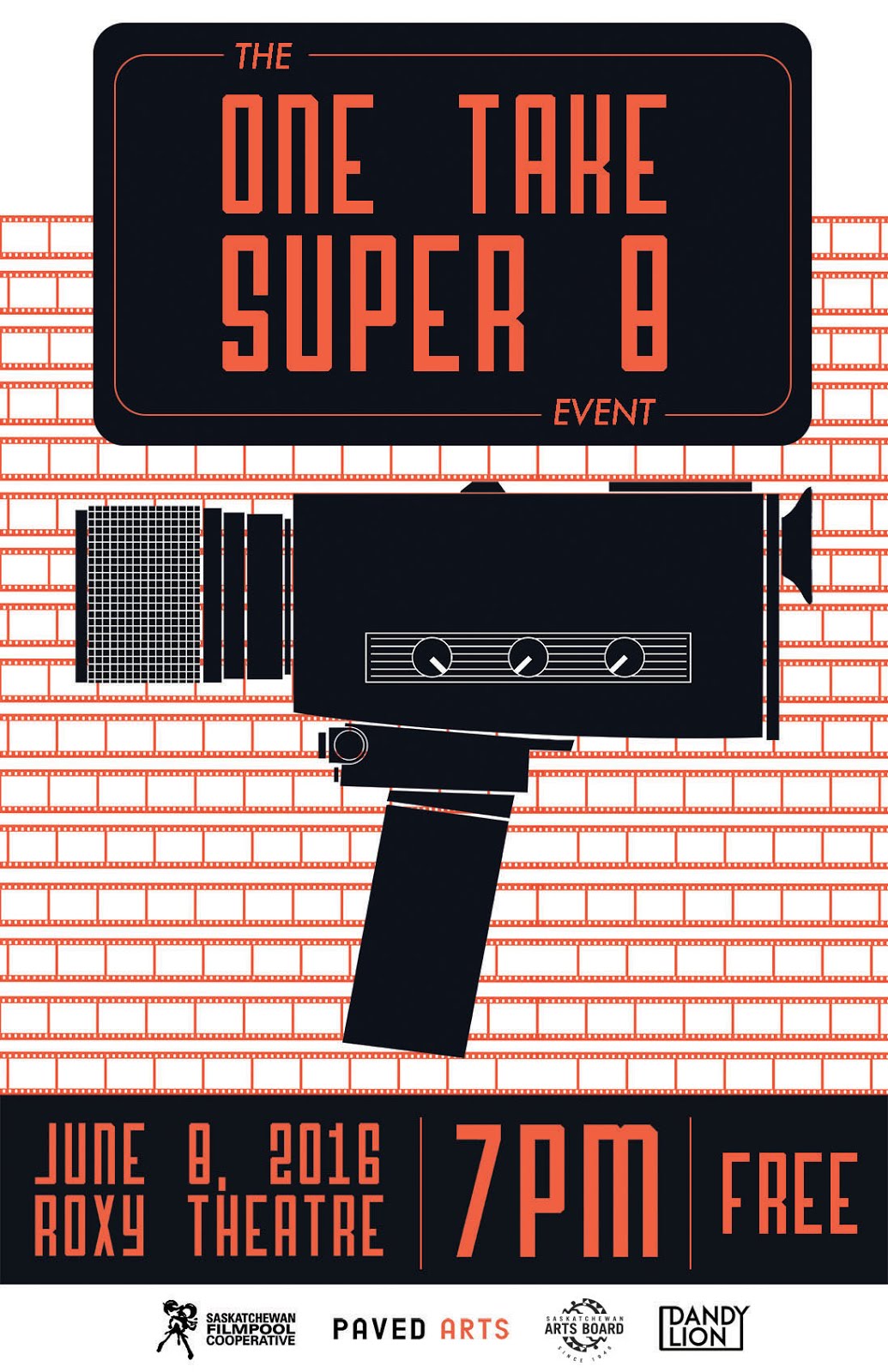 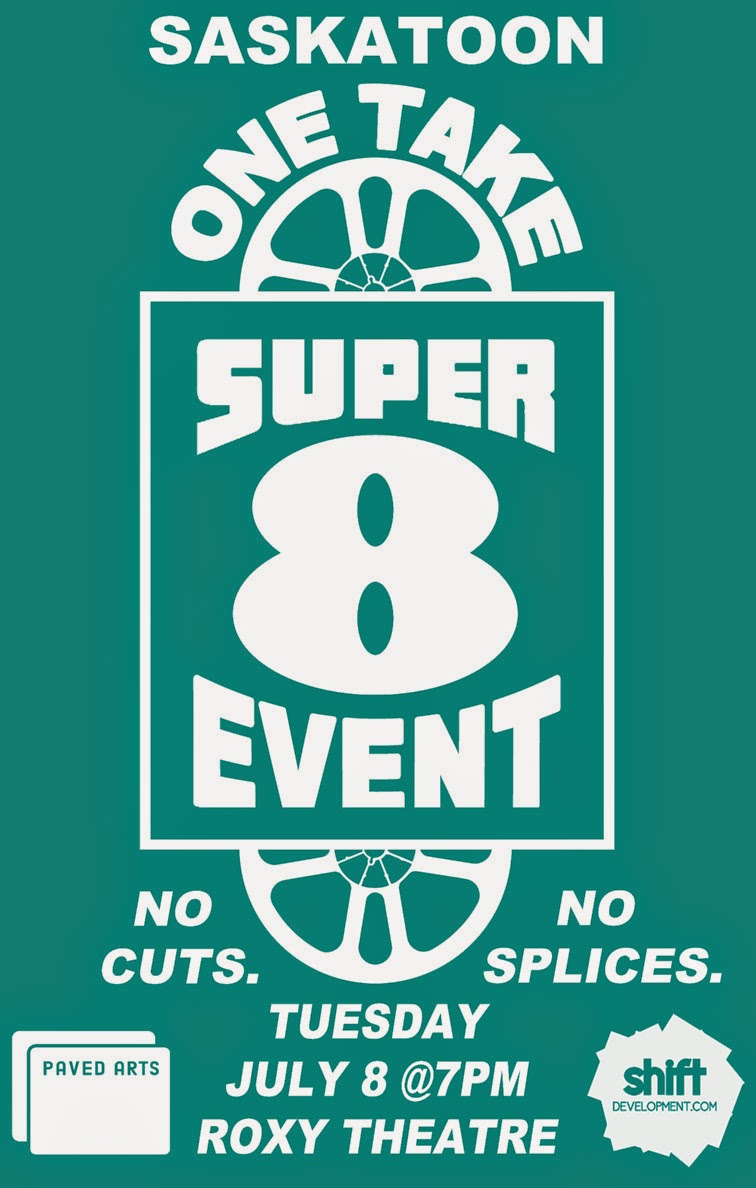